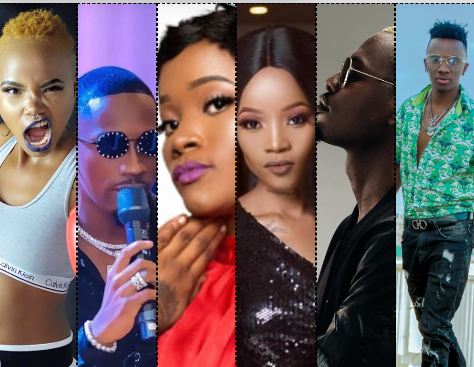 Tanzania-
With East Africa continuously flourishing with talent, music has taken the mantle in leading the African, and world scene. This isn’t different in Tanzania too. Shifting away from the renowned talents from this land, the country hold more younger artists slowly taking over its scene. ArtsGlo brings you some of the outstanding talents shaking the Tanzanian and regional musical wave;

1. Jux
With Afro-R&B not so much a genre Tanzania has been known for, Juma Mussa, who by fans is known as Jux is a sensation taking over the Tanzanian scene.
Even when his music dates over 4 years ago, his growth is impactful.

With not many having secured a collaboration, he recently did with Kenya’s Influential rapper Nyashinski.

2. Rosa Ree
The self-proclaimed Goddess of Rap is another wild rising hip-hop star. The rapper who is so versatile through her flows quite shift from the renowned Bong Flava craft.

Seamlessly swift through Kiswahili and English the Rapper holds a far greater attitude for taking over the East African and general African Hip-hop and Rap stage.

3. Ruby
Hailing from Tanzania House of Talent (THT), Ruby is an Afro Pop and R&B artist, who broke even in 2015 through Na Yule is her first single.

She has further spread wings, hence locally recording collaborations with Mafik, Kusah among others. She stands out for her strong powerful and soulful vice.

4. Damien Soul
Just like his stage name, the song writer and producer stands out for his multiple skill, which has evolved beyond just studio recordings, but to stage performances. Having graced larger platforms like the Sauti Za Busara, Damien Soul is a promise sell-out to the world. He has recorded songs with John Makhini, Switcher, Barnaba, G-Nako, Niki wa Pili and more.

5. Nandy
Rising Tanzanian female Afro soul and pop singer Nandy is another great talent to reckon. Known for her hit songs Nagusa Gusa, and ‘One Day‘ , which have pushed her to the lime light . Holding several collaborations with regional acts like Ommy Dimpoz, Willy Paul, Sauti Sol, among other musicians, hence growing her artistry beyond Tanzanian borders.

For this, Nandy has taken part in huge music events like the Coke Studio Africa and others, then recently scooped the 2017 Africa Music Award (AFRIMA), for Best Female Artiste East Africa.

Centano
Singer and song writer Centano Boy is another amazing act. Breaking onto the scene a few years ago, through songs like Story, Maumivi and Hisia, the musician has gradually continued breaking even, hence cementing firmer ground.

The sharp vocalist recently recorded a song Niongezee with fellow Tanzanian acts Country Boy and Moni Centrozone , which wowed many.

This isn't different in Tanzania too. Shifting away from the renowned talents from this land, the country hold more younger artists slowly taking over its scene. ArtsGlo brings you some of the outstanding talents shaking the Tanzanian and regional musical...
wpDiscuz
2
0
Would love your thoughts, please comment.x
()
x
| Reply